Editor's Note: The U.S. FDA recently published a guidance document on use of placebo in cancer clinical trials, which reminded us of a blog article from our archives investigating the same topic. We are republishing that blog article with its original findings from a search of ClinicalTrials.gov in August 2013, to illustrate the point that, well before the guidance was published, placebo-controlled studies in cancer research were uncommon.

Background
When it comes to cancer, fewer than 5 percent of patients diagnosed choose to participate in a clinical trial. So we took a look at the data available on ClinicalTrials.gov to see if we could shed some light on the likelihood of receiving a placebo in a cancer clinical trial. At the time, the website listed a total of roughly 2,600 cancer trials in the U.S., with about 300 of them listing "placebo" as a method of intervention.

What We Found
The numbers show that less than 1 percent of all Phase 2 or Phase 3 cancer trials in the U.S. used a placebo alone versus the drug being studied. For the majority of trials that did use a placebo, they used it in conjunction with standard-of-care treatments, not in place of them. So, while there's a chance that a patient would receive a placebo in place of the drug being studied, in most of those cases, they would also receive a standard, clinically-tested, cancer-fighting medication in conjunction with it. 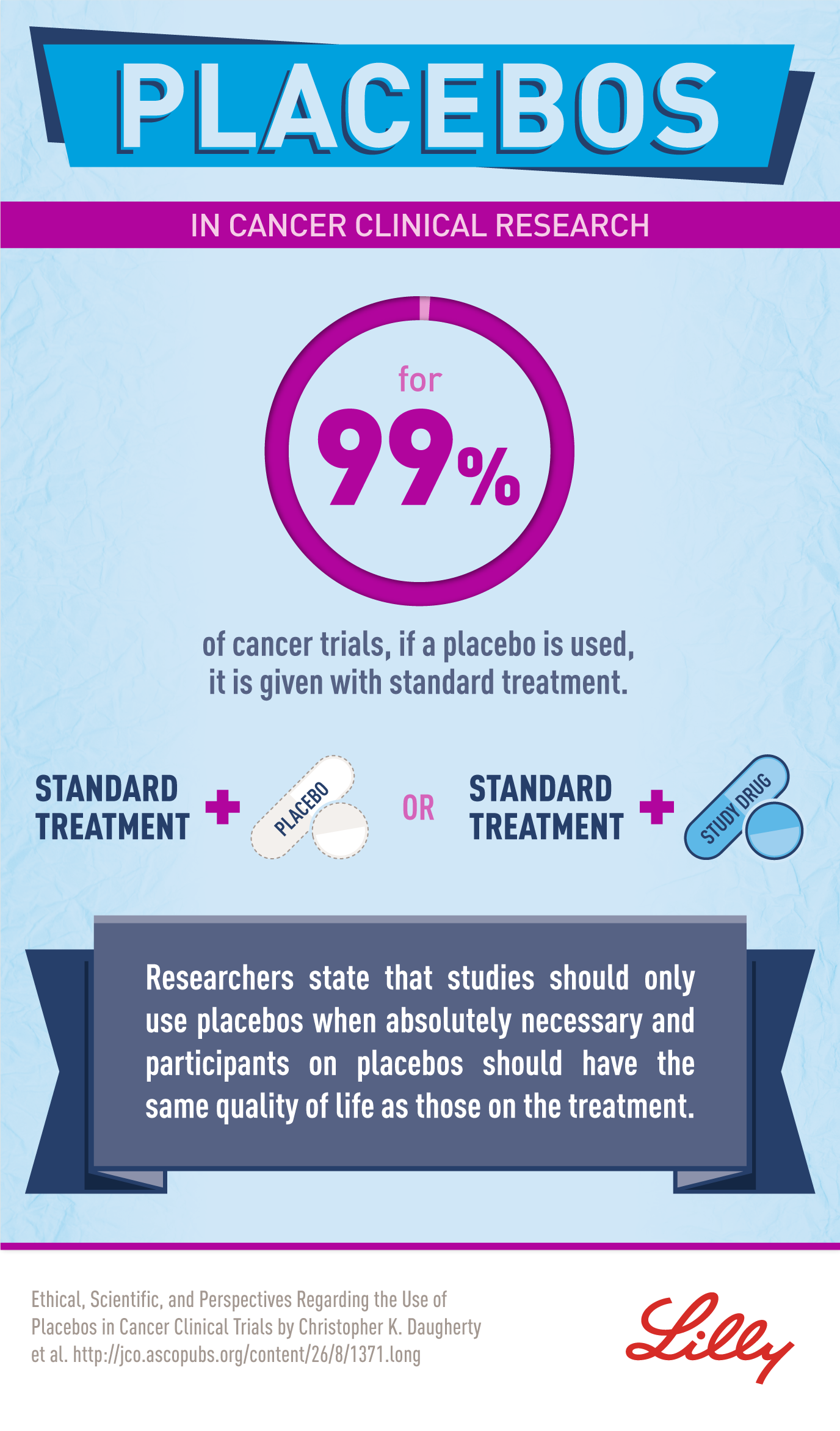 Notes on Our Methodology
We used ClinicalTrials.gov to gather and parse all data for our infographic, as of August 2013. All the data reported in this blog post are from that date.

First, we did a search of all currently recruiting, interventional Phase 2 or 3 cancer trials in the U.S. When we pulled the numbers, there were 2,675 trials returned from the search criteria.

The next search we did used all the same criteria as our initial search, but we narrowed the results by specifying any trial with "placebo" used as an intervention method. There were 300 trials that fit the additional criteria.

Once we had all 300 trials that listed "placebo" as a method in some form or fashion, we searched through each trial manually to determine whether the trial was studying a drug to treat the cancer. If the research was focused on studying something other than treatment of the cancer—a side effect or symptom of cancer or prevention in pre-cancerous patients, for example—we put it into a Not Related category.

At the end of the manual sorting, we had 150 studies in the Not Related category. That left 150 trials that were related to studying the treatment of cancer.

The 150 studies that were focused on a treatment for cancer were then placed in one of two groups:

The Path from HCP to Researcher: A Word of Advice

If you’re a physician interested in getting involved in clinical research, you must understand that it can be a big career shift. Luckily, Kamnesh Pradhan has valuable advice to share.