The Power of Unexpected Connection

Just a couple of weeks ago, my colleague Ken and I traveled to Austin, Texas and to the headquarters office of LIVESTRONG for the unveiling of the first sculpture for Hero's Journey™ Art. As you can imagine, there was a flurry of excitement and activity leading up to the big event—a flurry that matched the feeling of the city overall, since Austin was in the midst of one of its biggest events of the year: the South by Southwest (SXSW) conference and festival.

Our Hero’s Journey™ Art project and SXSW have something big in common: they both demonstrate the power of connection. People from all over the country have illustrated their stories on the bricks that make up the sculpture unveiled this month; and while they may never have met each other in person, their stories are both figuratively and tangibly linked through the power of art. Likewise, SXSW is all about confluence and the exciting things that can happen when people and ideas come together. So it’s especially fitting that my favorite story from the week is about exactly that—an unexpected connection that resulted in an unforgettable moment.

Ken met Dianne at a social open house, one of the many SXSW events happening that week. After talking for a few minutes, he told her about our art unveiling that night, and invited her to come over. As it turns out, Dianne had been in a clinical trial many years ago. When she was in the trial, she said, she realized the importance of doing research for the benefit of many others beyond herself. And then she said, "I wish I had joined my first research study when I was younger so that I could have participated in more of them."

When Ken and I connected during lunch, he told me about Dianne. I loved her story and wanted to connect with her to find out more. But all we knew was her first name. And we were on a tight schedule—I didn't have time to dash back over to the open house to find her in person amid the crowd. So I took to social media. 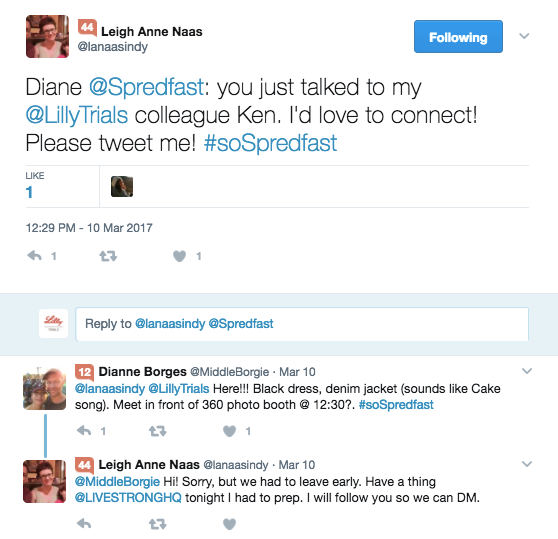 We were connected within an hour.

Fast forward to the unveiling. Everything went swimmingly: the art was amazing, the reception was fun, people connected with the art and with each other throughout the evening. As people began to drift away to other evening plans and the final few of us began to pack away cameras and other gear, a breathless woman approached me and introduced herself with an outstretched hand: "I'm Dianne!"

I squealed and gave her a big hug. I couldn't believe she’d made it—that a chance conversation with my colleague and a single tweet had worked out so serendipitously.

I showed Dianne the sculpture, and Ken invited her to contribute a brick to our second sculpture. She reminisced about her clinical trial experience. Theo (our filmmaker who is documenting the project) captured her story on film. She said she had actually forgotten about her research experience until the art rekindled her memory. This, for me, was THE moment at the unveiling, the reason we did this whole crazy crowd-sourced art project in the first place: to connect people with research and with each other.

This site is intended for US residents.